We just finished our unit on Arduinos and a project at the end called “Pimp your Pumpkin”. It was my favorite unit so far (The only other unit we’ve done is 2D sketches, but hey). We followed a 4 chapter packet (but we ended up not doing chapter 4 because the servos shorted some chromebooks). Here’s a few pictures and videos from the unit:

Making an LED blink!
How about 2?

And now – Pimp Your Pumpkin. It’s a project where you wire up your pumpkin with an Arduino to light up when a sensor detects something. I used a PIR sensor, they are most commonly used in motion detectors. You also could have used a photo resistor, which detects light levels, or an ultrasonic sensor which can detect how far something is away. They are commonly used in self-driving cars. I wish I had chosen the ultrasonic, because the PIR would seemingly randomly say that it detected something, when nothing moved at all. Anyways, here’s the project.

As a bonus, I wired up an LCD screen for Mr. Sinde. 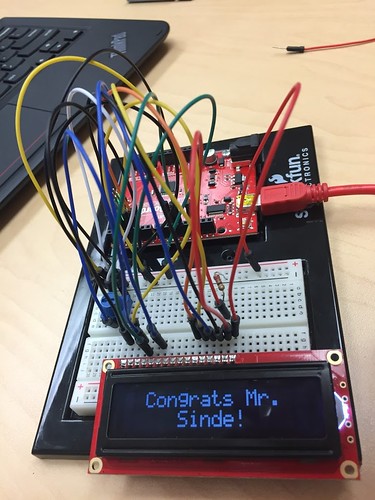