4.35 seconds was fast, but it could be faster. So we lowered the design, and got this. 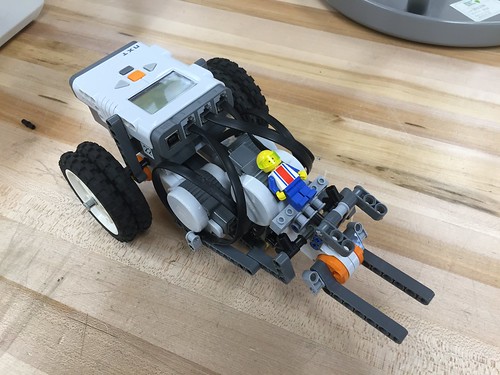 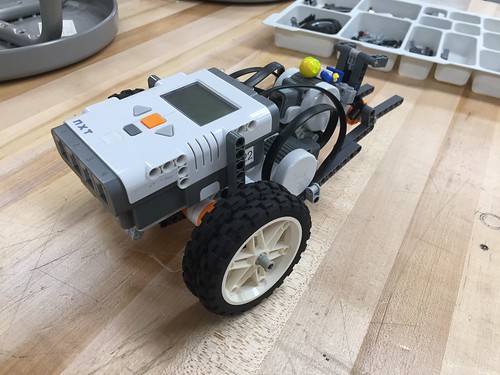 We actually had to remove the lego guy afterwards, becuase he was too tall. We continued coding our robot in class, during lunch, and even after school to try and get that better time.

However, we just couldn’t do it. We had a lot of trouble with picking up the ball, but we didn’t worry about that until the rest of the code was finished. We realized the robot moved too far forward at the beginning, and knocked the golf ball forward a little which led to it flying off. Now that we could pick up the golf ball, we could see if the rest of the code really worked. However, we soon realized that the weight of the golf ball was enough to affect turning and movement speed. We had to change all the turns to go for a slightly longer duration and had to take the first turn a little wider because the friction created by the golf ball scraping the wood was too high.

But the main problem we ran into after solving those was that with the big wheels, the robot just wasn’t accurate with it’s turns anymore. When it had to go straight at the end, it would turn right in the process from the momentum of the previous turn. Adjusting it to go more to the left would cause it to turn too much in the other direction, and we never got it to get the perfect angle. Here’s a slomo video of it going left when it should go straight:

When it came time for the last official test, it didn’t work, so our 4.35 still sits there. What’s good for us though is that no other group was able to officially beat us or the 3.83 that was the run ahead of us. That means we are 2nd place overall, and first place in our class. We also beat last year’s record of 4.5 seconds, so I’m happy about that. Here is the code for the 4.35.